All posts in arrested development

It’s time to leave: How to kick your family out of your dorm

If you’ve seen this year’s attempt at a fourth season of Arrested Development, you know that in the first episode we see Michael Cera’s character’s father move into his dorm room. Skeptics, take note: This is definitely what the first few hours (or days) of moving in feel like. When you get to your dorm room, the average over-protective parent/guardian will want to set it up for you as if they were decorating your nursery. They’ll actually be more of a roommate at that point than your real roommate. As long as you don’t let them come into the shower with you like the father and son above, the overdose of affection makes for a great feeling.

Relish the over-nurturing, because your family is about to go back home, and this should be the last time your mom makes your bed this year. That’s right: nobody who isn’t wearing a hairnet is going to make you lunch anymore (although the Brown dining staff are a bunch of sweeties). Have your family take you out to a meal on Thayer Street, and then take the traditional Hajj to Bed Bath & Beyond to buy some unnecessary dorm room swag. Then, as your loved ones are putting those finishing touches on your tchotchkes, arguing about the placement of your One Direction stereotypical Pink Floyd poster, you will realize it is time for them to get the f*** out.

END_OF_DOCUMENT_TOKEN_TO_BE_REPLACED

In case you haven’t realized, Arrested Development comes back on Commencement

As pretty much anyone who knows me can testify, I’m a crazy-huge Arrested Development fan. So when I heard that a fourth season was actually, finally happening, I reacted something like this:

I immediately started to plan what I’d do when the episodes were released all at once. I saw myself curled up on the couch for seven hours straight with nothing but my suitemate’s Netflix account and a giant thing of candy beans. And then Netflix announced the release date: May 26th, otherwise known as the same day that I’ll be walking through the Van Wickle Gates and graduating from Brown. And it felt a lot like this:

In these days, spoilers are everywhere the second new episodes go up (see Thrones, Game of), which makes it a lot harder to accept that I won’t be able to watch them right away (#firstworldproblems). Of course, there’s always the option of pulling an all-nighter to watch them before Commencement – since they’ll be up on Netflix promptly at 12:00 a.m. – but I’m pretty sure that would leave me walking through the gates feeling like this.

As the class of 2013 moves on to become activists, actors, and analrapists, at least we can watch Arrested Development post-ceremony and after our awkward family dinners to feel better about the fact that college is over. After all, happy tastes kinda like sad.

This past Tuesday, comedian Patrice O’Neal died at age 41 following complications from a stroke suffered in October. O’Neal, well-known in the stand-up community, received what was likely his highest exposure only a month earlier when he participated in Comedy Central’s Roast of Charlie Sheen. The overweight funnyman arguably stole the show, taking earnest-toned shots at fellow roasters Mike Tyson and Steve-O. After a night of being consistently made fun of for his age, career and purported senility, an astonished William Shatner proclaimed that O’Neal, of all the comedians present, was “telling it like it is.”

Even during the roast, O’Neal made references to his impending death. As the crowd reacted to his unflinchingly honest insults, he responded, “How the @#$% can I be too mean after this shit? I can’t believe it. I’m dying of diabetes and you mother@#$%ers are like, ‘Oh, that evil fat @#$%.”

O’Neal made very few appearances as an actor, but his guest spots on television were always memorable. He appeared in the second episode of “Arrested Development” as T-Bone, George Sr.’s prison buddy who briefly works at the banana stand (and unabashedly burns down the family storage unit). He also recurred on “The Office” as Lonny, the warehouse employee deemed “Sea Monster” by Kelly Kapoor. END_OF_DOCUMENT_TOKEN_TO_BE_REPLACED 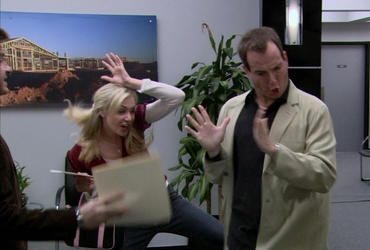 After all the recent controversy (and the slew of pathetic emails from CEO Reed Hastings), Netflix is automatically absolved of all sins. Now let’s get Community on there too.

ARRESTED DEVELOPMENT IS BACK!!!

After four and a half years of meaningless back-and-forth from cast members (we’re looking at you, Michael Cera, you mopey little bitch), series creator Mitch Hurwitz today announced his intentions to go ahead with not only a feature-length Arrested Development film, but also a Season Four.  END_OF_DOCUMENT_TOKEN_TO_BE_REPLACED