Last Sunday, the super-sized second season premiere of AMC’s “The Walking Dead” shattered records. With 7.3 million viewers and a 3.8 rating among viewers aged 18–49 (the key demographic), it became the most-watched television drama in the history of basic cable.

To put this in perspective, the show beat out a slew of network programs with some very familiar names — “House,” “The Office” and Steven Spielberg’s “Terra Nova.”

“The Walking Dead” has thus proven itself to be a television phenomenon. And yes, it’s worth watching. It’s a stylized post-apocalyptic thriller about what it means to survive in a zombie-ridden landscape. The structure, characters and tone are heavily reminiscent of early seasons of “Lost.” Most importantly, as a result of a recent deal between Netflix and AMC, the six-episode first season is now available on Watch Instantly.

Robert Kirkman’s brilliant ongoing graphic novel series provides the foundation for the show. It was adapted for the screen by none other than Frank Darabont, the writer-director of The Shawshank Redemption (still the best movie ever made, according to IMDb), The Green Mile and The Mist. As all three films were based on Stephen King works, Darabont has an intimate familiarity with the horror genre. Bringing “The Walking Dead” to life was an intimidating project, not to mention an expensive one. For zombie make-up, Darabont enlisted special-effects legend Greg Nicotero. You may have seen his work in the “Breaking Bad” finale two weeks ago, in one of the single most awesome scenes of television ever produced (don’t click if you haven’t seen the show).

“The Walking Dead” follows Rick Grimes (Andrew Lincoln, Keira Knightley’s would-be Love Actually counterpart), a Kentucky sheriff’s deputy who falls into a gunshot-induced coma early on in the pilot episode. He wakes up in a deserted hospital (like so many zombie apocalypse heroes) and finds that the town has inexplicably succumbed to a zombie epidemic. Eventually, Rick reunites with his wife and son and encounters an ensemble of colorful survivors, some of whom might prove more dangerous than the zombies themselves. 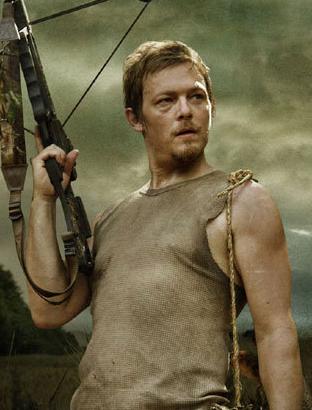 While the excellent pilot stays true to the books, Darabont ultimately chose to veer from certain plot details and create his own unique stories for the show. Kirkman, the creator of the graphic novel series, not only endorsed these departures with his blessing, but also participates in scripting a handful of episodes. The most successful experiment so far has been television-exclusive character Daryl Dixon (Boondock Saint Norman Reedus), the crossbow-wielding redneck that has quickly emerged as the rugged Sawyer to Rick’s pragmatic Jack (yes, I went there).

It is important to note that Darabont was unceremoniously let go from the show earlier this year due to disputes with AMC. Fortunately, this had not led to a decline in quality for the show’s second season — Sunday’s premiere was likely the best episode since the pilot. Catch up on the first season in time to watch the new episodes on a weekly basis. Herschel’s farm is on the horizon, and as a fan of the comics, I can safely say that it’s going to be well worth your time. Especially with Halloween coming up.